It is a period of civil war between the seen and the unseen. Residents of Menara City One, hunkered and hidden in their own units, have won their first victory against the evil Coronavirus. For yesterday Menara City One registered no new positive cases.

For the uninitiated (read: non-nerds) the paragraph above is an adaptation of the opening credits to Star Wars Episode IV: A New Hope. Rather then dwell on the setbacks and defeats of the past few days we choose to focus on the positives, and celebrate the small victories. May the force be with us all!

Today is the first day of the holy month of Ramadan.  It is a time when our Muslim brothers and sisters focus on prayer, fasting, giving to charity, and religious devotion. We would therefore like to wish our Muslim brothers and sisters a blessed Ramadan and hope that it will be the start of the first of many victories against the evil Coronovirus.

In the continuous fight against the evil Coronavirus the government has announced the extension of the MCO for the 3rd time until 12th May.

MCO extended 2 weeks to May 12


While there is no word on the EMCO imposed on Menara City One we are all collectively hoping and praying to be released from the barbed wires that surround our home by 28th April.

Our resident's chat group has also fallen silent but for the occasional message of well wishes to those fasting today. After the trials and tribulations of the past few days we were glad things have settled down and the heated exchanges from before have been long forgotten.

In the meantime, life must go on and we placed a fresh order for groceries and provisions with Ben Leow. If all goes well we should receive our supplies Monday morning.

Later in the day another round of disinfecting was done, mainly at the 7th floor foyer area. Since our floor was not involved we believe this exercise was also confined to and focused on the affected units involving the 11 positive cases of a few days ago: 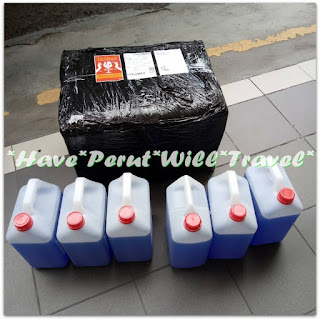 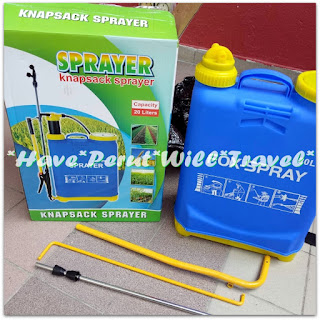 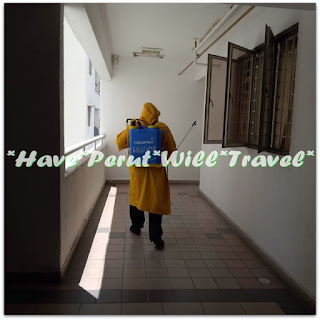 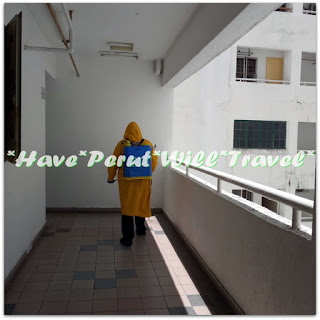 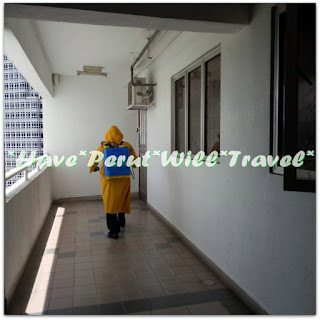 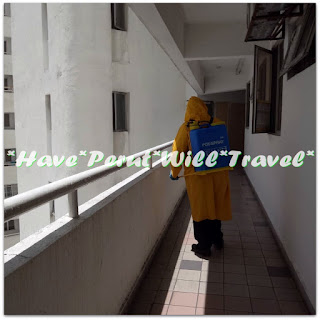 We will keep in mind these words as we do battle against the evil Coronavirus: “It is not despair, for despair is only for those who see the end beyond all doubt. We do not.” ― J.R.R. Tolkien.

At 4.30pm today during his daily press conference the Health Ministry Director-General Datuk Dr Noor Hisham Abdullah announced no further positive cases at Menara City One which remains at 51 cases. 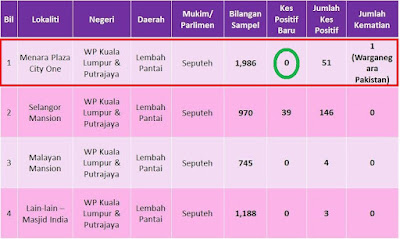 Late in the afternoon and in the spirit of Ramadan we placed an order for 25 packets of Nasi Lemak through Grabfood. These packets of Nasi Lemak were meant for the entire security officers of Menara City One, as well as the team of cleaners who have been working tireless during these difficult times. 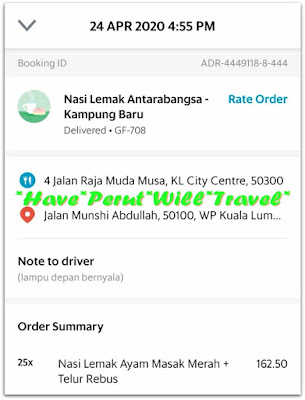 What with it being the first day of fasting as well we hope that this small token of appreciation would spur on our security officers and cleaners.

It has been 17 days since we were PCR tested, and we assume that our results are negative. We ask that everyone we know to pray for our continued health, safety and well-being.

Later in the evening we received a notice from Dr Eliza, a resident and committee member of the Residents' Association that a second round of PCR screenings will commence tonight at 9pm: 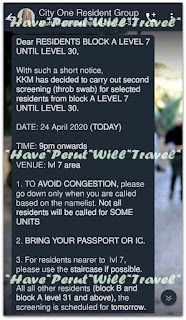