Today is the 30th day of the lock-down imposed on our condo, and we wait with pragmatic optimism the announcement on its fate during the Senior Minister (Defence) Press Conference later in the afternoon.

Yesterday Dr Eliza, a resident and committee member of the Residents' Association posted this blessed message on our residents' chat group:

To recap KKM has:


Therefore our EMCO should be lifted by 30th April! 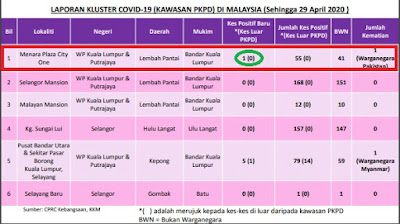 It has been 3 weeks since we were PCR tested, and we assume that our results are negative. We ask that everyone we know to pray for our continued health, safety and well-being.
- April 29, 2020