After the intermittent rain throughout yesterday afternoon that lasted into the night, this morning was pleasantly cool and cosy. Today is the 28th day of the lock-down imposed on our condo, and we wait with pragmatic optimism the announcement on its fate during the Senior Minister (Defence) Press Conference tomorrow afternoon.

To recap the events of the past few days, the media outlets had first highlighted the plight of Menara City One residents who were subjected to mass screenings on the night of the 24th of April. In response to this The Health Ministry Director-General Datuk Dr Noor Hisham Abdullah blamed the congestion on the convergence of both residents of Blocks A and B coming down for screening at the same time.

The residents then sent out this press statement to all media outlets to refute the claims that last night's congestion were due to the residents of both blocks coming down for screening: 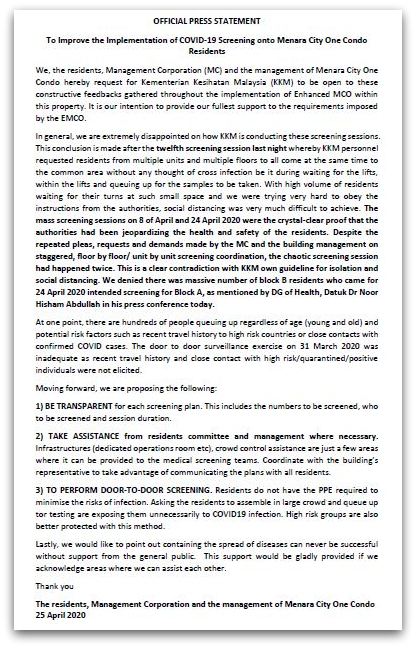 
So there you have it, we are all caught up.

On a separate matter, today being a Monday we are expecting delivery of our groceries and provisions from Ben Leow later this morning.

At about 10am we received word from Ben that his delivery partner from Lalamove has just left his grocery shop with our items. Ben said the same driver from before, Gunaraj expects to arrive at our condo by 10.30am. This time armed with a proper trolley I went down alone to meet Gunaraj.


Approximately half an hour later Gunaraj arrived. Since Ben diligently separates dry from frozen items, Gunaraj again had to make two trips back and forth from his car to the lobby to collect two boxes. God bless you always Gunaraj (and Lalamove)!

As always as soon as I got home I proceeded to:


We then inspected the items delivered and informed Ben that all the items ordered were present and accounted for, and thanked him for his help.

As always, a sealed polystyrene foam box filled with ice was used to pack all our frozen foods, and another sealed cardboard box  was used for the rest of the items. God bless you always Ben!

Anyone interested in arranging for delivery of groceries and provisions can reach out to Ben at +60125213577. You can find details of his grocery shop in a previous post.

Later at 2pm during Senior Minister (Defence)'s Press Conference it was announced that the EMCO on Simpang Renggam has been lifted. There was not mention about Menara City One's EMCO. 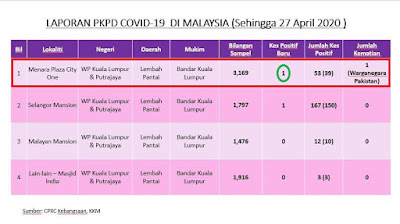 It has been 20 days since we were PCR tested, and we assume that our results are negative. We ask that everyone we know to pray for our continued health, safety and well-being.
- April 27, 2020