Since it was our last night in Melaka (we planned to leave early the next morning to avoid the weekend traffic along the NKVE from the south headed to Kuala Lumpur) we decided to pamper ourselves to a little upmarket Nyonya soul food.

Although nothing near the overpriced Nancy’s Kitchen a few doors down, Kocik Kitchen does not quite fit the description of the everyday food for the everyday man. Nonetheless it’s a welcomed, occasional distraction.

Cat says the name Kocik is derived from the Hokkien term for youngest aunty.

Scanning the menu, we decided to sample their signature dish: the 1Ayam Buah Keluak. We added a large omelet together with another Kocik speciality, the 2Otak-Otak and 3Ngo Hiang Rolls.

Truth be told the Ayam Buah Keluak was not to our fancy, and something we believe to be more of an an acquired taste. Interestingly enough, Timeout Kuala Lumpur says: “Malaysia’s answer to the fugu fish, buah keluak (also known as pangium edule) is a deadly ingredient that’s used in Malaccan Peranakan cooking, with the most notable usage being in the ayam buah keluak dish. The unassuming large brown nuts (the seeds of the Kepayang tree found in the swamps of Southeast Asia) contain hydrogen cyanide, which can be lethal if ingested in large amounts.”

So in a way we felt vindicated. Other than then, the other excellent dishes more than made up for the rather disconcerting taste of Ayam Buah Keluak. Would we recommend Kocik Kitchen to anyone else? Of course we will, and if you have the acquired taste for Buah Keluak then it will be an added bonus.
- Saturday, March 21, 2015 No comments:

Anyone coming to Melaka town, and especially to the area of Jonker Walk will know that it is an absolute pain to have lunch in any one of the Chicken Rice Ball shops here.

Since we did not want to bother, and did not mind having regular Chicken Rice (instead of the balled variety) we headed out of town to a small suburban area where we read rave reviews about its dishes.


Funny enough, the signboard does not say what the name of the shop is except for the capital “W”. It was much later that we found out the W stands for Wilson, and that this is just one of many Wilson Chicken Rice branches found in Melaka. In fact, there was one Wilson restaurant which was quite near our budget hotel. Sheesh!


The rave reviews were not without merit, and we thoroughly enjoyed the roasted chicken that Wilson had to offer, and its rice was cooked to perfection as well. From the perspective of the everyday food for the everyday man, Wilson definitely fits the bill.
- Saturday, March 21, 2015 No comments:

We returned from the Portuguese Settlement and with some time to burn before lunch we stopped by the Red Square (sounds like a place in Moscow!) for a short stop.

No trip to Melaka would be complete without a visit to The Stadhuys. It is one of, if not the most iconic landmark in all of Melaka. Some would say A Famosa or St Paul’s Hill are equally famous, but when you say Melaka visions of the Red Square immediately comes to my mind.

It was built by the Dutch in 1650 and was used as the administrative center of successive governments for a period of 300 years. It was eventually converted into a history museum till the present day.


Another tourist attraction and source of countless photo opportunities here is the Queen Victoria's Fountain built to commemorate her Majesty’s Diamond Jubilee.

We got lost in the moment gazing at the many attractions here that we almost forgot lunch. Off to Wilson's!
- Saturday, March 21, 2015 No comments:

The Portuguese Settlement is a Malacca Portuguese community in Ujong Pasir, Melaka, Malaysia.

The Malacca portuguese are a Malaysian ethnic group with mixed Portuguese and Malay, which arose during the Portuguese colonial period (16th to 17th century).

In 1933, 11 hectares of land at Malacca were purchased with the purpose of creating a haven for scattered Malacca Portuguese and their culture. The swampy land was cleared and 10 wooden houses with earth floors and attap roofs were built. Saint John's village, as that simple fishing village was originally known, soon attracted additional malacca portuguese living all over Malacca, and grew to become one of Malacca's main tourist attractions, improving the standard of living of its villagers.

I came here a very long time ago before all this land reclamation began, and in place of the concrete plaza of hawker stalls there were wooden huts overlooking the sea. You literally sat under the stars and beside the gentle waves as you had your dinner of seafood and other assorted dishes (my particular favourite was the Devil’s Curry).

Today the swamp is gone, and in place of it is a clean and satinized version of the Portuguese Settlement that I am not sure what to make of. Regardless, we’ll be coming again for dinner one of these days. Hopefully I’ll find me some Devil’s Curry!
- Saturday, March 21, 2015 No comments:

Breakfast out of the way, we headed back in the other direction in search of authentic local 1Nyonya cakes. Again, I found this shop after an extensive online search and we were excited for what was in store here at Baba Charlie. Even the name held its own charm and appeal.

Good heavens! The amount and variety of Nyonya cakes sold here are just beyond belief, so we’ll just let these photos do the talking. 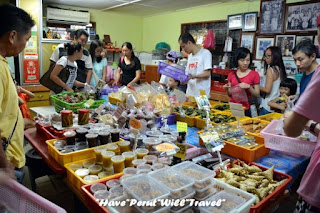 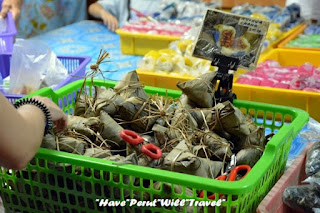 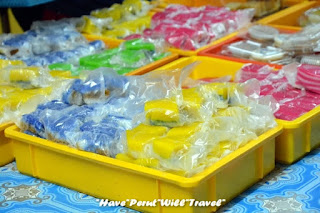 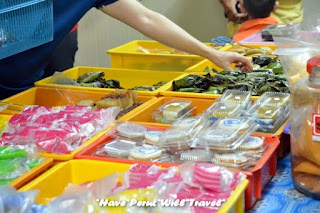 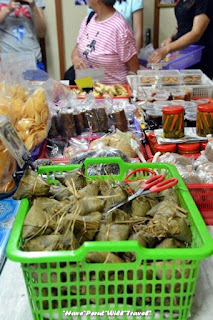 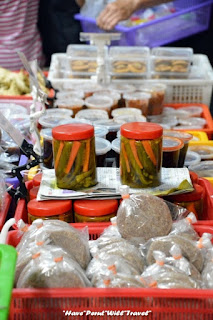 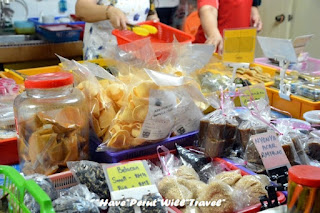 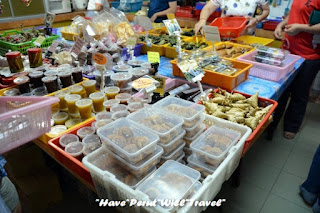 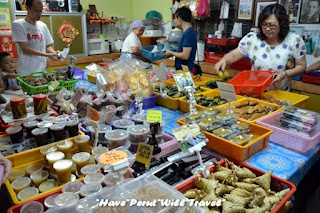 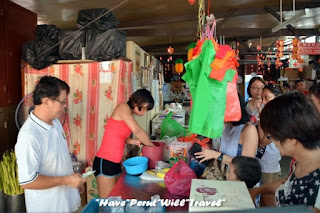 This place is pretty tricky to find so be sure to rely on your navigation device (or Waze, the mobile app) because the lane leading to Baba Charlie is very narrow and pretty inconspicuous.
- Saturday, March 21, 2015 No comments:

We woke up late the next morning and checked out of The One Boutique Hotel at around 11am. We then headed to Ah Ma House to sample their s...