Happy Birthday Vivi!
Kuala Terengganu.
I spent all my youth here. My earliest memory as a child was running buck naked along a kampung lane, living in a humble kampung house with no running water. I remember taking baths by a well and depending on an outhouse to do my ‘business.’ Kampung Nesan Empat is a distant memory, a haunting memory that stayed with me.
I also remember living in a house in the general vicinity of Jalan Pejabat dubbed the "ghost" house. I remember being friends with a girl next door called Ah Lan who lived with her elder siblings that were very fond of using (unbeknownst to me at the time) very 'colourful' language. I remember my father being rather 'temperamental' then, and I remember a ten-year-old me running away from home in the dead of night in absolute fear of incurring my father's wrath. "Ghost" house indeed.
I remember living a quite nomadic life, having moved house many times before finally settling down at Kampung Padang (somehow later know as Jalan Air Jernih). This house belonged to my grandparents and was one of the last ‘residential’ houses still standing in the town of Kuala Terengganu until it was sold and torn down more than ten years ago.
I remember walking every day to my primary school (Sekolah Rendah Sultan Sulaiman 2) a kilometre away, being bullied by a boy in Standard Six and having my books thrown out of the classroom, strewn all over the branches of a tree. I remember my first crush when I was twelve, her Malay name translated to English says Princess Diana! It was also about the same time that I started wearing underwear.
I remember moving to a house my father bought when I was thirteen in Bukit Payong. In the days before wide and immaculately paved roads and slick highways I felt like I was living in a remote village, disconnected from the world. The house in Bukit Payong was fun, and each school break was spent riding my bicycle all over even ending up in Chendering beach some twenty kilometres away.
I remember going to school took what felt like an eternity, catching the school bus at 10am only to arrive at school three hours later. I guess my parents grew tired of the commute and eventually sold the house. We moved back to the town of Kuala Terengganu and became nomads again moving several times more.
I remember frequenting a stall in Kampung Cina to have my 'ceranang' fix. It was a hole-in-the-wall stall fondly referred to as "Mok Mek Ceranang" that sold ridiculously cheap food and beverages. The stall was located at the back of a store that sold Marvel, DC, and other comic books that I could not afford. What I wouldn't give for another taste of the Auntie’s ceranang (I have no idea how to describe 'ceranang', perhaps you could Google it?).
*Vinodh later reminded me that the name of the ceranang cum comic book shop was Chee Sek!
I remember playing football on the beach, cycling my red racing bike to secondary school (Sekolah Menengah Sultan Sulaiman) several times a day for classes and tennis practice after that. I remember Kris and I cutting class, hiding out at Deva’s house to watch, erm, ‘recreational’ movies on a projector.
*Kris later reminded me of the packet of Matterhorn cigarettes we used to share at Batu Buruk beach, and in his own words "The thought of Matterhorns still gives me a sick feeling in the stomach!".
I also remember hitting puberty in a bad way and being an absolute prick to my oldest and bestest friend Vinodh. I would like to believe that I have since made amends with him, and that our friendship has stood the test of time.
I remember spending a lot of time in church rehearsing with the church band, preparing for events, and practicing carolling each December. I even remember serving as the church's Youth Council President, imagine that! Christmas time was always a wet affair, with heavy rains and flood waters rising especially around where we lived.
I remember being an awkward teen constantly feeling alone and left out. I remember looking around me in class wondering what I could do to fit in. I sadly have no fond memories of my teenaged years, outside of home and church. I do remember however, being well fed in school for not much money. A hearty lunch at the school canteen would only cost me fifty sen (RM0.50), and with RM10 in my pocket I was king of the world!
I remember moving to Kuala Lumpur in 1986 after completing my SPM (Sijil Pelajaran Malaysia, equivalent to the "O" Levels) to further my studies, then work. I remember a very dark period in my life when I did not come back to visit the family for five whole years.
After the dark cloud had lifted, I remember eventually coming back to Kuala Terengganu ten years later to begin a new chapter in my life. I joined Southern Bank in June 1996, and a month later I met and fell in love with Cat.
We were married in August 1998 and a year later welcomed Brendan to the world.

I remember the last few months we spent in Kuala Terengganu before I was transferred to Kuala Lumpur (still with Southern Bank then) to join a newly established department. We made sure to visit all our favourite eateries, and bade farewell to all our dearest friends and family.
Some years later my parents too relocated to Bentong. After a period of neglect our ancestral home at Kampung Padang was sold off and torn down to make way for a car park. How incredibly cliched.
Cat and I will always look back at our time in Kuala Terengganu with great fondness, and always with a tinge of melancholy. It was here that we met, fell in love, and got married. It was here that our son was born, and it was here that my career took a step in the right direction.
We will soon be back to visit Kuala Terengganu, to where it all began for me, for us. Back to the scene of many ‘crimes,’ back to where my heart never left. 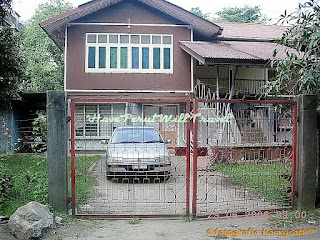