It's Booster Day Again!
I had received my first and second vaccine shots on 13th June 2021 and 4th July 2021 respective. Then the unthinkable happened, Cat and I were tested positive for Covid-19 on 26 November 2021, the Delta variant at that!
After a prolonged period of recovery we both received our booster shots on 26 January 2022, and exactly six months later I received my appointment for a second booster shot. My appointment was scheduled today at 12:00pm at the Pusat Pemberian Vaksin (PPV) Offsite Centre at Pavilion Bukit Jalil, while Cat had yet to receive an invitation.
We left our apartment at 9:30am and walked to the Bandaraya LRT station to catch a train on the Putra Heights Line . Approximately half an hour later we arrived at the Awan Besar LRT station, and caught a free double-decker shuttle bus to Pavilion Bukit Jalil.
A short time later we arrived, and after some deliberation headed down to Level 1. Here we were hoping to find a bite to eat before the vaccination appointment. We eventually settled on Nasi Lemak at our favourite foodstall, Bungkus Kaw-Kaw.
Breakfast out of the way we took the elevator up to Level 5 in search of the offsite vaccination centre. We were soon there and I sat down to be registered with the kind person on duty. Again, I decided to casually ask him if Cat could be allowed to receive her booster shot here as well, and the kind person said that it was possible!
After a few minutes fiddling with her MySejahtera app he was able to book her an appointment here as well. We were then ushered along to to the cubicles where the booster shots were administered. We received our booster shots effortlessly and were then ushered to the final station where our MySejahtera apps were updated.
And with that, it was done! Again there was practically no waiting time, and the entire process end-to-end from the time we entered to the time we exited the Offsite PPV took less than ten minutes. Kudos to all concerned for the well-oiled process.
Apparently the Offsite PPV here accepts walk-ins for those who have received their first booster shot at least six months ago regardless of age, so we will probably ask Brendan to come here in the coming days to received his second booster shot as well.
N/B: A day after receiving the booster shot, I again had a splitting headache, had the chills, ran a fever, and ached all over. It only lasted a day, and I was relatively fine the following day. Cat only suffered a stiff and aching arm, and nothing else. So, for those having second thoughts please do get your booster shot, for a little pain will accord you long-term gain!
The list of fare we had incurred during our excursion today were as follows:

We do what we can to support local businesses, and it's always good to know that everyone here observes all related SOPs, it helps make us feel safer and reassured.
- July 26, 2022 No comments:

Time for another run-around!
We had been quiet the past few weeks attending to family matters as well as chasing work related deadlines. This weekend was the first time we were able to roam free from pressing matters, plus this time around we had someone joining us.
Remember the apartment that my sister Virginia (Ginny) left in our care? Well, Waldorf is now occupied by our other sister Veronica (affectionately known as Imm) who has made the difficult but necessary decision to return to Malaysia. She spent had all her adult life working and living in Singapore and after more than two decades has moved back.
Our weekend therefore started off with a Grab car ride to Waldorf Tower to meet up with Imm. Brendan has been quite the night owl since his semester break and decided to sleep in. Yet again.
With Imm in tow we then headed out of Hartamas Shopping Centre and waited for the Rapid KL T852 bus that would take us to the Semantan MRT Station. We caught the bus soon after and twenty minutes arrived at the Semantan MRT Station where we caught a train to Mutiara Damansara.
Here we disembarked and walked along the desolate corridors and walkways of The Curve before making our way to IPC Shopping Centre. None of us had breakfast so we thought it a good idea to have brunch at one of the eateries at the lower ground floor.
After checking out what was on offer, we settled on MyeongDong Topokki and had ourselves a fine Korean meal.
Our tummies filled we headed back up to the ground floor and entered IKEA, our true destination for the day. We spent quite some time browsing as Imm looked for home decor inspiration while Cat and I checked out the curtains and railings.
We then made our way back to the Mutiara Damansara MRT Station and hopped on a train in the opposite direction. This time we were headed to the Muzium Negara MRT Station, and specifically KL Sentral.
We were eager to show Imm the excellent public transportation hub that is KL Sentral, where you could catch an MRT, LRT, Monorail (for urban travel) as well as the KTM Komuter and ERL trains for inter-city travel. Not to mention the various buses from here that goes to KLIA and even Genting Highlands.

After a brief tour of KL Sentral we wandered further in and soon found ourselves at NU Sentral, where we stopped by for drinks. We then headed back to the Muzium Negara MRT Station and caught a train to the Semantan MRT Station before catching the Rapid KL T852.
We got on the bus and after ten minutes Imm disembarked at the Plaza Damas bus stop to head back to Waldorf, while we continued on and made a loop back to Semantan. We then caught the Rapid KL T820 bus to Menara DBKL (KL City Hall) and walked back to our condo.
The list of fare we had incurred during our excursion today were as follows:

We're back!
It's been a while since our last proper blog, so this time we're going on a right rigorous Kuala Lumpur run-around. As always, we had some errands to run this fine Saturday morning.
We caught a RapidKL #300 double decker bus from the bus stop near our home to Avenue K in Jalan Ampang. From Avenue K we took a walk to Corus Hotel and headed to the Aeroline bus counter inside.
Yes, we are planning another trip to Penang, this time with Brendan in tow. The tickets were a little pricey at RM60 each (approximately USD/EUR14) due to its so-called "business class coach services".
On the appointed day we will board the bus here in front of Corus Hotel before eventually disembarking at Queensbay Mall in Penang.
We then walked back to Avenue K and made our way to Max Fashion before heading down to the lower ground floor to the LRT station entrance. Here we stopped by the counter to get a Touch 'n Go card for my sister Vivien.
We then boarded the Putra Line train and within ten minutes had arrived at KL Sentral. We decided to have an early lunch at Meals Station before making our way to the KTMB ETS Ticket Counter to get our return train tickets from Butterworth.
The fare was RM80 each (approximately USD/EUR18) and after selecting our preferred seats (the couch was practically empty) we paid the lady and left the counter.
Our errands settled we walked out of KL Sentral and caught the GoKL Free Bus (Red Line) back to Jalan Raja Laut. We disembarked at the KL39 Menara DBKL bus stop and then walked into SOGO Kuala Lumpur. Cat did not find the hair conditioner she wanted so we walked out and across Jalan TAR.
We then headed to the site of the Ramadhan Bazar Masjid India in search of our favourite banana fritters before walking back to our home. With that we end our run-around here and hope to see all of you real soon.
Lastly, we feel that it is our civic duty to remind everyone that while masks are now optional outdoors, it is still mandatory indoors!
(Do visit our YouTube Channel Have Perut Will Travel)
📍 Location:
KL31 Hentian Munshi Abdullah - https://goo.gl/maps/NB6fVKFYTsSfb6227
Air Terjun Bukit Nanas - https://goo.gl/maps/vi75i14AjYUNoAEL6
Avenue K Shopping Mall - https://g.page/avenue-k-shopping-mall?share
Corus Hotel Kuala Lumpur - https://g.page/corushotelkl?share
Aeroline (KL) - https://g.page/AEROKL?share
KLCC LRT Station @ Avenue K - https://goo.gl/maps/EmRXv5cevfVeHWwo6
KL Sentral - https://goo.gl/maps/sfDBF8C9p7GXFkDP6
Meals Station @ KL Sentral - https://goo.gl/maps/6QbtF5PNdXXkZQJx5
ETS Ticket Counter - https://goo.gl/maps/oqGYC7p9Yf3XbvDr6
GoKL Bus Stop (Red Line) - https://goo.gl/maps/gMHHEUyRnBrbt2Bv9
KL39 Menara DBKL - https://goo.gl/maps/GGfi33Ub2SpR7UVk6
SOGO Kuala Lumpur - https://goo.gl/maps/vEaHQgq5cYfgWPBp6
Ramadhan Bazar Masjid India - https://goo.gl/maps/4BkQW39UprAYprp17
We do what we can to support local businesses, and it's always good to know that everyone here observes all related SOPs, it helps make us feel safer and reassured.
- July 16, 2022 No comments:

нello everyone! we are caт and нarold ғroм ĸυala lυмpυr. welcoмe тo oυr вlog, creaтed ιn нonoυr oғ oυr devoтιon тo тнe everyday ғood ғor тнe everyday perѕon, aѕ well aѕ тo caтalogυe oυr мeмorιeѕ, lιғe'ѕ evenтѕ, and тravelѕ wнere oυr 'perυт' (тυммy) leadѕ тнe way!
Brendan's back!
25 July was to have been his end of semester but since classes have ceased for now he was given approval to come back home early. With such short notice a late evening flight from Kuching was the cheapest option that MAS had to offer, so we booked the 8:40PM flight.
We left our home at half past eight at night and arrived in KLIA within an hour. Our Touch 'n Go card (a smart card is used by Malaysian toll expressway and highway operators) balance was running low so with time to spare we went in search of an ATM. Alas, all Maybank ATMs here was not able to help us reload our card so in the end we did so at a 7-Eleven.
It is worth noting that reloading our Touch 'n Go card at the 7-Eleven attracted a surcharge of RM0.50, which was not ideal but unavoidable.
Brendan's plane landed at about ten and after a delay in the delivery of his luggage to the appointed carousel he exited the arrival gates almost an hour later. With that we end our vlog here, so stay tuned for more content in the weeks to come.
Lastly, we feel that it is our civic duty to remind everyone that while masks are now optional outdoors, it is still mandatory indoors!
(Do visit our YouTube Channel Have Perut Will Travel)
📍 Location:
Kuala Lumpur International Airport - https://goo.gl/maps/BjbG8YdxWdPhLGhA7
We do what we can to support local businesses, and it's always good to know that everyone here observes all related SOPs, it helps make us feel safer and reassured.
- July 02, 2022 No comments:

PENANG Runaround 5 (GURNEY DRIVE and Back) 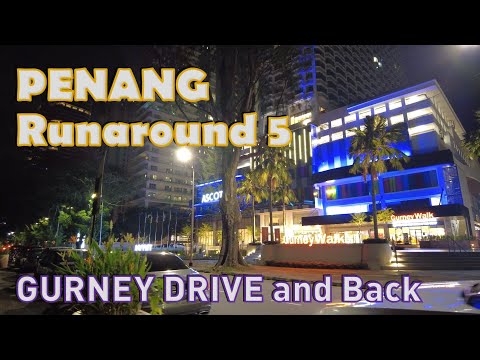