After the drama of yesterday nothing much happened today. Not that we are complaining, since we prefer things to be calm and peaceful as we wait out the EMCO.

In the midst of calm and serenity we heard a loud commotion downstairs at the 7th floor foyer area at about 3.30pm. Turns out a team from KKM have began taking samples from selected residents with close contact with other residents that have been tested positive for the virus. 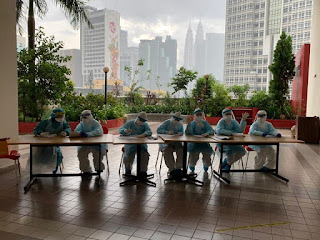 KKM have actually began gathering samples from high risk residents since Wednesday 1st April. From what we've gathered they've been focusing on certain groups of residents first. We're still waiting our turn, though our neighbours the Punjabi family from the other side of our floor were called up to provide samples today. It took about 5 minutes.

Other residents not deemed high risk will be screened in stages from Monday onwards. We wait in anxious anticipation.

Based on the unverified reports we received yesterday from our friend at the condo management office (COMC), and after consulting with our immediate neighbours (who had left their units vacant for various reasons) we decided to paste A4 sized notices on their front doors asking that all queries should be directed to us. We were worried that the PDRM might take it upon themselves to force open our neighbours' units to determine if indeed it was vacant.

We were also worried that a unit that has been forced open might leave it vulnerable to unsavoury elements who would take advantage and steal, or worse still, gain entry (via the balcony) into our unit!

We ask that everyone we know to pray for our continued health, safety and well-being.
- April 03, 2020