Today is the 29th day of the lock-down imposed on our condo, and we wait with pragmatic optimism the announcement on its fate during the Senior Minister (Defence) Press Conference later in the afternoon.

It has been drizzling the whole morning since we woke up. The weather is somewhat gloomy yet calming, the dark clouds an ominous sign of things to come later in the afternoon, perhaps?

After all that has happened throughout the EMCO, we would like to clearly state that while we regret the misfortune that has befallen our home, never once have we regretted staying here at Menara City One:


Then at about 11am Dr Eliza, a resident and committee member of the Residents' Association posted this blessed message on our residents' chat group:

In a gist KKM has:


Therefore our EMCO should be lifted by 30th April! 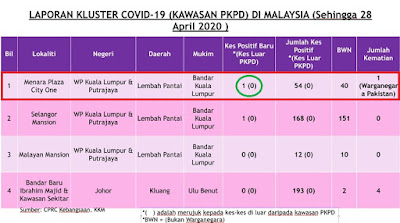 It has been 3 weeks since we were PCR tested, and we assume that our results are negative. We ask that everyone we know to pray for our continued health, safety and well-being.
- April 28, 2020