Some semblance of calm returned to our condo.

I received a message from the courier company that my guitar pedals (ordered from Lazada on 27 March before our condo was put under lockdown) had been delivered.

I then made a call to our security officer who advised me not to make my way down to the ground floor to collect since things were as chaotic as ever. Remembering the events of last Saturday I too was eager to avoid a repeat of the mayhem that ensued then.

We asked if it were possible for any one of the security guards while on their rounds to hand the parcel over to us later. She gladly obliged but warned that it would take some time, and the 'delivery' could even take place the following day. We told it that it was not an urgent matter and that whomever doing the 'delivery' could take their time.

Surfing the web for news we were struck by the ignorance of some countries that still refused to implement some form of lock-down. Some refuse to give in to what they describe as mere mass hysteria, while others feel that the economic impact of a lock-down would be too much to bear. Well, there won't be any economic hardship to bear if there is no one left, will there?


Sweden, which refused to implement a coronavirus lockdown, has so far avoided a mass outbreak. Now it’s bracing for a potential surge in deaths.

Our prayers are with you Sweden.

On another note Singapore is finally enforcing a  month long lock-down from tomorrow 7th April onwards. We wonder what will be the fate of the thousands of Malaysians working there, will Singapore continue to provide accommodations or send them home?

This evening we were greeted with some marvelous news, in the form of updates from the Health Ministry Director-General Datuk Dr Noor Hisham Abdullah, in his daily press conference: 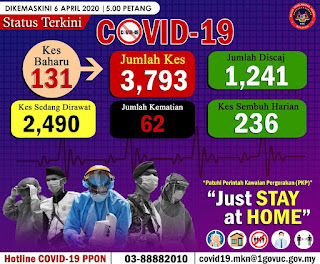 For the first time since the pandemic started Malaysia recorded a higher number of discharged cases than there were new cases. With only a recorded death today this gives us much hope, especially residents of Menara City One that the MCO, and our EMCO could be lifted soon.

The Health Ministry Director-General further announced that a total of 1,893 residents have been tested so far with only 24 confirmed positive cases. That constitutes a little over 1% of positive cases among those tested, and if there are no more positive cases we are hopeful that our EMCO will end on 13th April 2020.

We ask that everyone we know to pray for our continued health, safety and well-being.
- April 06, 2020