Truth be told we were never really interested in visiting mosques, and to be very clear it had nothing to do with the issue of faith. Where we come from, apart from a few notable exceptions we’ve often held the view if you’ve seen one mosque, you’ve seen them all. Well, in Malaysia anyway.

The Sheikh Zayed Grand Mosque however, is quite something else.

We arrived just as the sun was setting and its imposing size stood out as a large impressive silhouette in the Abu Dhabi evening sky. In order to visit the mosque Cat had to change into a brown abaya that the mosque authorities provided, something that quite plainly tickled her pink. Apparently the smallest abaya was still too large for Cat, and she spent the evening literally sweeping the floors here.


For non-Muslim visitors, the visiting time is from 9:00AM to 10:00PM every day except for Friday mornings. Just some fun facts about this magnificent mosque:

The mosque was finished with a decoration of Greek and Italian white marble, which is considered to be among the purest of the world.


The mosque's spectacularly decorated interior features unique plants designed specifically for the mosque, as well as verses from the Holly Quran. In addition, the designers have also used mosaic to cover the entire courtyard (17,000 square metres) and thus it is considered among the largest open spaces in mosques worldwide. 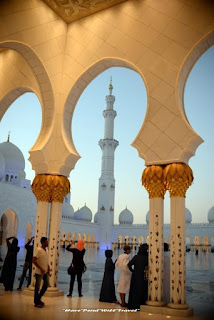 Major international companies specialised in the manufacturing of crystal chandeliers garnished the mosque with seven gold-plated chandeliers in different sizes, made of Swarovski crystals. The largest of the lustres is the largest in the world.


After a good two hours we made our way out of the mosque, but not before a few last parting shots.

Built as a monument to consolidate Islamic culture and a prominent centre for Islamic sciences and named after the founder and first President of the UAE, the late Sheikh Zayed bin Sultan Al Nahyan this is the third largest mosque in the world - after the ones in Mecca and Madina in Saudi Arabia, and no wonder!
- December 28, 2016