It is our 9th day in the UAE, and today we were left to our own devices since both Ginny and Sern had to get back to work.

Our Wednesday morning began slowly, and the first task we got out of the way was laundry. While waiting for laundry to be done we took a walk to Al Reef Downtown and eventually settled on Costa Coffee for a spot of brunch. It was noon and we decided to have our beverages outside to enjoy the rather cool weather.


An hour later we walked back home and after completing our laundry we then walked out again to the bus stop right in front of the main gates. A Filipino lady who sensed our confusion was kind enough to tell us that that we should catch the 101 bus if we wanted to go downtown to Abu Dhabi.


A little side note: We had already purchased our Hafilat cards last week at the Abu Dhabi Central Bus Station as soon as we came back from our day trip to Dubai. These cards would prove useful for us when taking the local buses around Abu Dhabi and beyond, since we need to tap these RFID (NFC) enabled cards to the bus Check-In Check-Out devices (CICO) before boarding and alighting any Abu Dhabi local bus. We found a machine kiosk selling the Hafilat card and purchased 3; each Anonymous Smart Card CSC (Permanent Use) card costs AED10 and is valid for five years but we bought the AED20 variant so that it would each have a purse balance of AED10.

We waited for a while and after about 10 minutes we caught the 101 bus. The bus ride took us from Al Reef all the way to Hamdan Street and the 40-kilometre trip took approximately an hour.

The bus fastidiously stuck to the speed limit of 80 kilometres an hour, making it a pleasant ride offering an amazing tour of Abu Dhabi from a street level. From Al Reef the bus took the scenic route along Yas Island where we caught a glimpse of Ferrari World; then to Jazeerat Fahid Island before traversing Al Jubail Island onto Saadiyat Island (where we witnessed an SUV involved in a road accident all by itself, we suspected the driver was texting and driving at the time) before crossing the bridge and into the Al Danah district where Hamdan Centre was.


We got off the bus at the stop in front of Hamdan Centre (the fare was around AED4) and walked around to look for a decent place for lunch. We were looking for something beyond the usual diminutive cafeteria and found a Nepali restaurant, which in hindsight was in keeping with yesterday’s theme of international cuisines; we had a Filipino lunch and a Korean dinner the day before.

Well oh well, the food was absolutely delicious, and we topped it off with a cup of karak chai each. The Nepali proprietor was amused and intrigued to have a Malaysian family at his restaurant. Word got around and an elderly Nepali man sat next to our table and struck up a conversation with us. He said he worked for Carrefour Seri Petaling for 6 years before coming to the UAE.

He remarked that while UAE paid better, he still preferred the freedom that Malaysia had to offer. When we probed him further, he said in Malaysia he was free to walk into any convenient store to buy beer!

This was one of those rare days when we managed to spend below 100 dirhams for a meal of 3. We then walked along the same street and headed to our true destination for the day, Gift Land Centre as well as Gifts Tower that sold souvenirs at very reasonable prices. We spent some time there again stocking up on souvenirs, as well as browsing the various and plentiful knick-knacks on sale.

We then headed back to the Hamdan Centre bus stop to catch the same 101 bus to get to the Abu Dhabi Central Bus Station. There a crowd was growing, mainly consisting of office workers and other employees of the various businesses in this very busy district. We found it intriguing that plenty of people still rode the buses in Abu Dhabi.

About half an hour later we caught the same 101 bus to head to the Abu Dhabi Central Bus Station (the fare was AED1). We then crossed the street to Al Wahda Mall and did some window shopping as we waited to meet up with Ginny and Sern after they got off from work later. 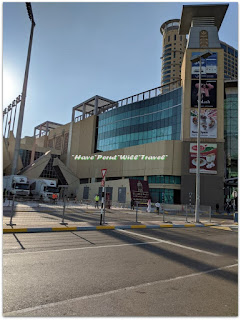 Ginny and Sern had another surprise in store for us later in the evening, which involved a presidential palace and an awesome light show.
- January 29, 2020