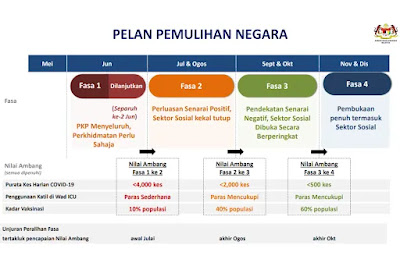 Kuala Lumpur entered Phase 1 of the National Recovery Plan (NRP) on 16 August 2021. Among other things this meant that:
It was then announced that effective 10 September 2021 Kuala Lumpur would enter Phase 2 of the NRP. While most restrictions were still in place this essentially meant that inter-district travel (based on district borders determined by state governments) is now ALLOWED. It was this announcement that spurred us to take a trip to Bagan Lalang.
Kuala Lumpur then entered Phase 3 of the NRP on 1 October 2021, and two weeks later finally entered the final phase i.e. Phase 4 of the NRP on 17 October 2021.
In the midst of all this it was announced by the Prime Minister that interstate travel would be allowed from 11 October onwards. With this announcements we soon made plans to visit several places, including our upcoming trips to Ipoh and Bentong.
It is worth noting here that the ability to dine-in, travel across state lines and do basically anything and everything outside the home is a privilege given to those who have been fully vaccinated only.
With this we hope that our blog, and vlog can flourish again.
(Do visit our YouTube Channel Have Perut Will Travel)
- October 10, 2021

Email ThisBlogThis!Share to TwitterShare to FacebookShare to Pinterest
Labels: Miscellaneous