We had done our grocery shopping the night before. It was a day like any other day since the Government implemented the MCO. Then at about 6pm our neighbour sent us several photos and videos of the PDRM, army and KKM swarming our condo. A perimeter around our condo was established and we learnt later that the MKN had put us under complete lockdown from 31st March onwards, till 13th April.

Words could not begin to describe our feelings at the time. Panic, anxiety, fear, anger, shock, and a host of other emotions washed over us at the time. Yet at the back of our minds we could not help but feel relieved that we had stocked up the day before. It was as though an angel from heaven had whispered in my ear the night before to make a trip to LuLu, just across our condo.

We have often wondered about the word 'surreal'. Even the word itself seemed surreal to us, an alien sensation. Until of course, being placed under the EMCO. The swirl of commotion around our condo left us giddy and breathless!

Our friend who works with the condo management office (COMC) said that EMCO was declared after:

All were attributed to the Tablighi Jama’at gathering at the Masjid Jamek in Seri Petaling! Soon as the EMCO was declared several ‘saringan’ (filtering) teams from the KKM went to the affected units to perform contact tracing. From what we know the affected units were on the 20th, 22nd, 25th, 29th, 30th and 31st floors of our Block B. 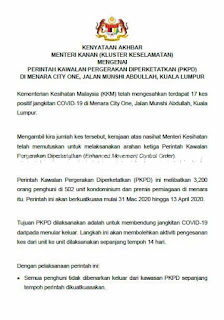 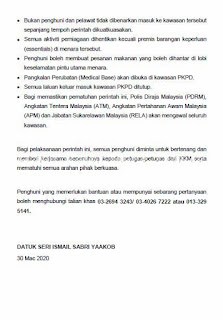 All through the night we kept watching one newsreel after another:


God have mercy on our souls, and we ask that everyone we know to pray for our continued health, safety and well-being.
- March 30, 2020