Woke up the next morning and headed down to the hotel's breakfast buffet spread. It was nothing spectacular.


Breakfast out of the way, we went to the hotel lobby to ask for a map of Hat Yai.

Armed with a map, we were ready to explore all that Hat Yai had to offer. Downstairs, we came across some street vendors peddling some pretty interesting stuff.

We were told that these birds are sold to those wishing to 'make merit' at the nearby temple.﻿


We wandered further down the street and came upon a lane (Coordinates: 7.005139, 100.471042) filled with leather goods and other merchandise hanging right up to the rooftops.


The last time we were in Hat Yai Brendan wasn't even born yet. We remembered going to a department store called Diana, so we hopped on a tuk-tuk and went there.

Diana Complex (Coordinates: 6.997778, 100.478125) turned out to be a disappointment, it was run down and unappealing. I had no desire to take photos save for this photo of the indoor waterfall.


Feeling famished, we took another tuk-tuk to the same location we had lunch yesterday (the stretch of restaurants along Lamai Songkrew Road, Coordinates: 7.002431, 100.475764). We had chicken rice for lunch.

After lunch, Cat went to do her hair at a salon across the street.

Then it was a hop on the tuk-tuk back to our hotel.

Once back at Lee Gardens, Cat and Brendan went walkabout while I paid another visit to the tattoo shop.


I got me another tattoo to complement the old one I had from way back when. I decided on 'Yahweh' as it was my favourite way of addressing my maker. The tattoo artist (Mhen) stylized the fonts to mimic the Thai alphabet, pretty ingenious of him. 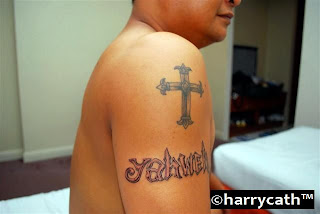 Later that evening we came across an elephant, I was startled and in trying to avoid its path, stumbled upon this quaint little shop off the beaten track (Coordinates: 7.007292, 100.470903).

We noticed that the shop was patronized by staff of the hotels nearby. I guess this is why the food was way cheaper. We later learned that this shop cooks tom yam in the southern thai style, while the shop we visited yesterday (Rose-E Son) served the northern variety.


Later that night, we couldn't sleep so we went to a stall run by this old siamese muslim couple.

Went to sleep pretty late, and I had even more trouble sleeping now both my arms were throbbing from the fresh (self-inflicted) wounds!
- December 25, 2008